I have anxiety and clinical depression.  There. I said it. Those little words are difficult to write- let alone say. 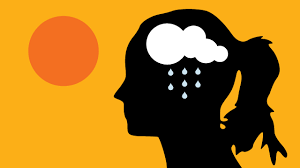 I have dealt with depression for at least 22 years.  I say 22, since I’m not sure if my teenage years counted.  I mean, most days I wanted to stay in bed-disappear from the world.  You know those kids— the ones who might have a few friends, but definitely not considered to be “popular”.  I remember in elementary school being invited to birthday parties and I came up with an excuse not to go—-I was just too shy, the thought of going to a party would make my heart beat fast, shake and I would feel panicky.  Eventually, no one even bothered to ask me anymore—whether because they knew I wouldn’t go anyway or because I was no longer considered popular.

I’m talking about these things because I hope that parents and their kids are aware that this anxiety is not normal.  I’ve talked about my feelings with my mom after I was older and she feels that she should have noticed the signs. My family was awesome growing up-  picture the Cosby Show, but with Belgian parents… that was us. My dad was the ever-present loving jokester and my mom was always there for support. Even my husband thinks of her of a sort of “Aunt Bee” type.  So, they were attentive and loving. So what was wrong with me?

Maybe there were signs even before my teenage years… like my mom attempted to take me to a Girl Scout meeting.  I cried. Ballet? Cried. First week of school? Cried. Every. Day.

I didn’t know what anxiety was.  Depression was for someone else… I just had “down days.”  By the time I reached my senior year, something changed. I lost weight.  A lot of weight. I got attention from boys (not from school, mind you— boys and men outside school) and so I moved from wanting to hide in my bedroom, to self-destructive behaviors.  I lived in Austin, TX at the time and Austin has something called 6th Street. This is an ENTIRE street of bars and nightclubs. I would go there by myself—not caring what would happen to me.  A good night would be if someone bought me a beer, or if the bouncer let me in with a drinking wristband.

So, I was an untreated depressive teenager. Keep in mind, I wasn’t suppressing any abuse or anything like that.  I have heard this from some families coming into the Center for help or through the “grapevine”— someone does some egregious act and no one can figure out why.  Parents and/or grandparents wanting to know what changed in their child. I’m not saying that the person has some mental illness- but there definitely is a possibility.

Psychiatrists might not be the answer (mine just kept prescribing medications or increasing doses) but a counselor might.  Maybe attending our Family Solutions Program will shed some light on your child’s behavior.

One day, after stopping all medication that my psychiatrist prescribed me, I visited our family doctor (who I’d seen since 1985) and he prescribed me the medication I have been taking for the last 20 years.  I told my husband is was like walking outside on a sunny day after days of rain. I could see the sun, see the beauty in the world. Years later, I find out my father was diagnosed with depression- and his mother, my grandmother had such terrible bouts of depression she would literally stay in bed for a week or more.  But that was in a time where it was taboo to talk about mental illness at all

Great strides have been made over the years to attempt to diminish the stigma against mental illness.  Talking about it definitely helps. But more needs to be done to assist our youth. If your sweet child is starting to be self-destructive, like trying to run away or argue with you at every turn (I remember yelling at my mom for commenting how pretty my nail polish was) then look into your family history.  We don’t need a generation of medicated kids, but there might be legitimate reasons for your child to see a doctor and talk about their feelings. 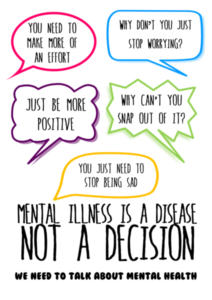 Mental illness is real and like hair color, it can be hereditary.  You could be the best parent in the world and your child might succumb to its effects.  This doesn’t make you a bad parent, but be an aware parent. Stay involved in your child’s life. Talk to them-have family dinners, maybe a game night, anything so you can talk with them and hopefully you can notice abnormal behaviors before they grew, like mine.